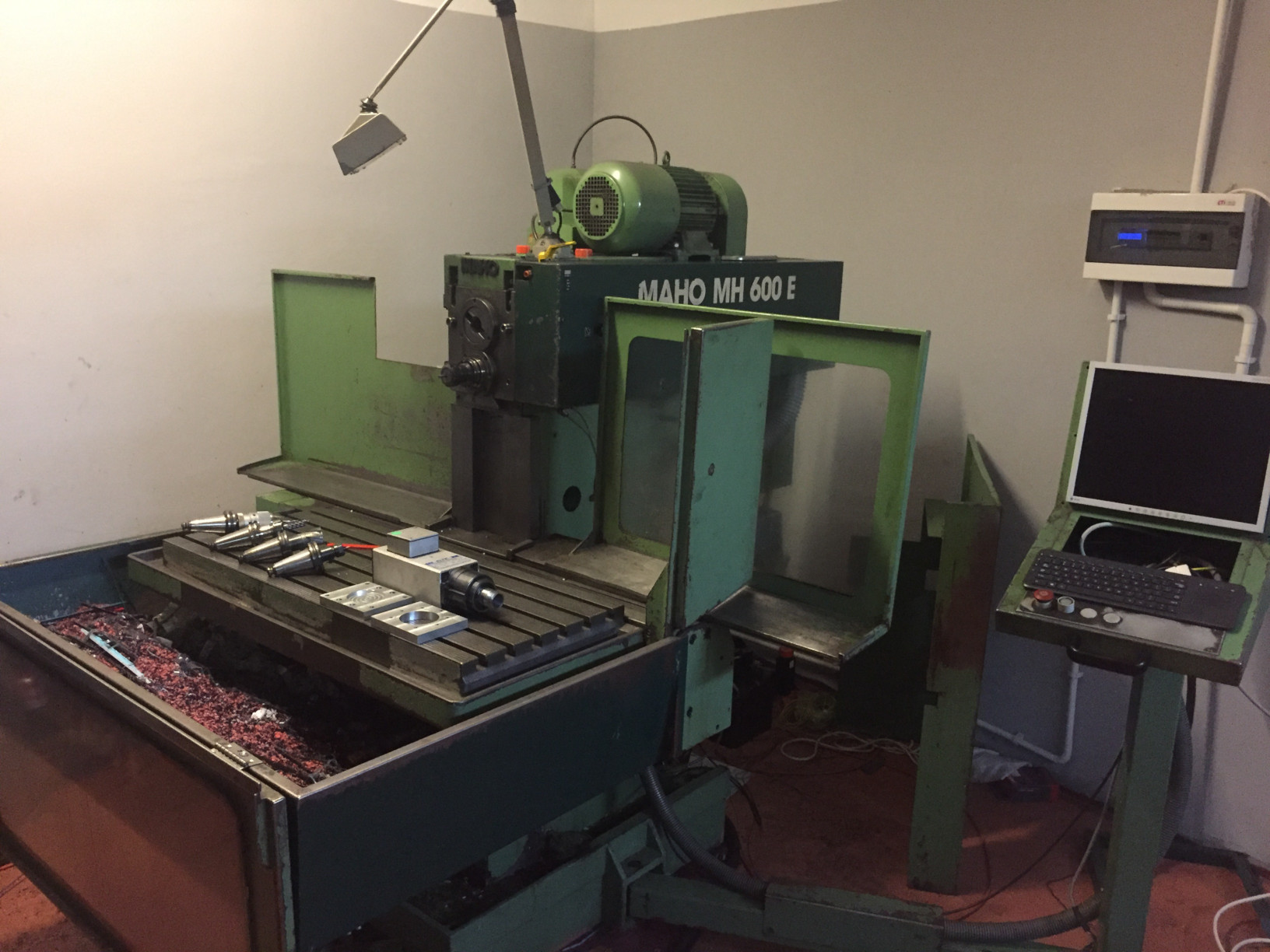 Hi guys, this is Marcin and today I wanted to tell you about what’s been happening behind the scenes, so to speak, since there’s been a new development of considerable significance to me – my CNC machine broke down!

If you don’t know what that is, it’s basically a piece of equipment that I’ve been using for the past two years to make all ShapeShift trays. Which of course is a bit of a catastrophe! Also, welcome to the Phobos Foundry blog!

Before I get into any more details I want to say upfront that yes, I’m getting a new machine and no, I’m not throwing in the towel and closing down. The new equipment should arrive in August according to the manufacturer and when it does, work will resume on making more ShapeShift trays.

I debated for a while whether or not to simply temporarily close down the store, but I decided that for maximum transparency it would be far better to start a blog and have a cenralized location for people to keep up to date on what’s happening here. Yes, there is a Phobos Foundry/ShapeShift Facebook page, but FB doesn’t really give you the same options a blog does. Fair word of warning, I tend to write a lot when I sit down to it!

The machine that broke down, a 1985 Maho MH600e, is a computer-controlled device for cutting 3d shapes in various materials. You can program it directly using a special programming language known as G-code, or you can generate machine code using computer software when you have a 3d model of your part.

You can use a dizzying array of rotary cutting tools to make short work of whatever it is you want to cut and these types of machines are a staple across all types of industries, whereas machining is also a niche form of entertainment on YouTube with a surprising number of fans (check out channels such as: This Old Tony, Stefan Gotteswinter, Abom79, oxtool, VintageMachinery.org, to name but a few).

So what I do to make my products is I take a piece of pre-cut sheet stock which I attach to the work table of the machine using double sided tape. That would ordinarily not work or damage the table for several boring reasons, so for anybody who knows more about machining I will mention that I attach the tape to a sacrificial aluminum plate, rather than directly to the mill’s T-slot table itself.

After I input the position of the stock into the machine’s computer control and run my program, it’s going to move along 3 axes of motion to bring a spinning cutting tool in contact with the material at the right places. This machine can move the material sideways, up and down and the tool itself forward and backward.

The computer control uses mathematic interpolation to realize movements along various contours, including circular motion and helixes, even though each axis can only move in straight lines.

To know where the tool is in relation to the material and where it needs to be going, the Maho uses servomechanisms attached to the motor driving each axis. A servo mechanism is essentially a feedback loop – the computer tells the motor how much it should turn and gets information back on how much it actually did turn. On top of that, each axis has an optical device that tells the computer where the axis is physically. That way, if there’s a discrepancy between the result of a command issued by the computer and the actual position of the tool in relation to the material, that error is compensated to provide the necessary accuracy.

Servomechanisms allow highly precise movements to be realized automatically and every program on a CNC machine is simply a sequence of such movements, translated into electrical current sent to each motor.

To get back to our issue, I’ve been having trouble with movements in the so-called Z axis, which is responsible for moving the work table up and down (astute readers will see that the manual page above calls it the Y axis, but that actually depends on which spindle the machine is using to cut, since the Maho has two). There are problems with the servo mechanism or with just the mechanical wear on the moving parts which has accumulated over the machine’s intense lifetime cutting metal. The result is unstable operation which can, and already has, led to further damages, namely the tool smashing into the workpiece.

Despite my best efforts over the past two weeks, I’ve been unable to fix it on my own, and I’ve also been unable to get help from a qualified service technician. This is because the machine is very old and any number of causes might result in such erratic operation. In truth, to further its service life, this Maho should be torn down, each part cleaned, inspected and either refurbished or replaced. After an optional repaint, which shouldn’t really be optional because a machine like this is rarely torn down and the paint protects its metal parts from destructive environmental factors, the whole assembly should be rebuilt and tested.

I could definitely find someone to do all that, because as you might imagine, it’s very expensive and there are companies which specialize in such work, but not only would it exceed my financial capabilities, it would likely take 3 months at minimum and would involve the logistics necessary for sending off a 2 ton machine to the rebuiler’s facility. It would simply put me out of business.

For smaller repairs, service technicians are scarcely available, it is an understaffed trade here in Poland, they have too much work and so they try to find jobs that yield the highest pay (read big jobs).

So why did I get an old machine like this to begin with? It was bound to fail at some point after all. Well, this type of industrial equipment is extremely expensive to buy new and this particular mill was just a good deal at the time when I needed something like it.

The machine I’m getting now is far cheaper new because it belongs to an entriely different class. When I bought the Maho, I used it to make aluminum molds for casting resin parts. For that application, it was very good since I could achieve a decent level of precision despite all the wear and I didn’t mind that the work was rather slow.

Since that manufacturing avenue ultimately didn’t work out, and I might get into more details about failed ShapeShift iterations in the future, I used the Maho to cut parts directly rather than to make tooling. For the purpose of medium-scale production in plastic, the Maho was just a bad choice.

I needed to make some modifications to get acceptable machining times on my parts, and in the end, I also retrofitted the mill with a new computer and control, LinuxCNC. Unfortunately my best setup lasted a mere month before my newest issues started, and I began to search for a way out.

I still want the Maho to work at some point, because I can use it to make injection molds in the future (designs for which I have already purchased this year, well before my problems started). Since these things are super expensive to commision and the type of work – precision cuts in hard steel – perfectly fits the Maho’s profile (even if a modern mill would make such molds quicker, speed is pointless when you’re not offering a service but use the mill for your own needs). Rebuilding the machine would cost far less than making the molds I need, and I decided to hold on to the Maho for the time being.

And so I came to the conclusion that buying a different type of machine was the best way to go forward. It should be very well suited for cutting plastic and other light materials, and would be much faster though less precise (with a less sophisticated servo mechanism than my current mill). It should outperform the Maho in terms of production, and also change the way I work and stock parts. I have already placed my order and will have the new mill in August.

One of the best things about a factory new machine of course, is that it’s new! Hence, you get a warranty and don’t have to know everything about it to use it, since there are service technicians available to fix any problems that come up. This was also a very important factor in my decision on how to continue with ShapeShift in the near future.

Whether to continue or not was not really up for debate, since, fortnately, the demand speaks for itself for which I am very thankful!

When the new machine arrives I will manufacture and ship all the outstanding orders that waiting customers choose not to refund and hopefully get back on track to making great products for miniature wargamers across the world.

See you next time in an update on the new machine!

Leave a Reply Cancel reply
Your Cart
Contact Us

Feel free to send us an email at:

or give us a call on Skype:

Do you need to know more about how our products work before making a choice?

Check out the bounty of info and reviews on our homepage.